Yea, i know goat milk is on the fringe and especially RAW MILK.  Well if you want to learn more about goat milk check out a friend’s website cause she did a great job.                   St John Creamery

Basically, goat milk is closer to human milk than cow, so it’s said to be more digestible. Also goat milk is somewhat naturally “homogenized” so it doesn’t “require” the processing that cow milk receives cause they (big dairy business) want it to travel around the world and not end up with little cute butter balls on top. 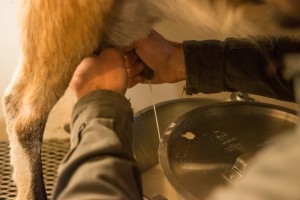 But RAW MILK!!!???  Who would want to drink that?  I think some Surgeon General said it was like playing russian roulette with your health!

Let’s see, where do i start…  Blah blah, people were getting sick from cows in cities in NY around the late 1800″s early 1900″s cause the cows were fed distillery slop and never saw a grass blade and were in confinement on their own shit….. Then Mister Pasteur who “Pasteurized” for the wine industry began doing that to this sick milk and, Voila! Babies were saved!  What a hero.  Wrong.  Well maybe a little bit, but he or his constituents missed the main point:  Sick animals makes sick milk making people sick.  Some of that germ theory stuff they were using i guess. 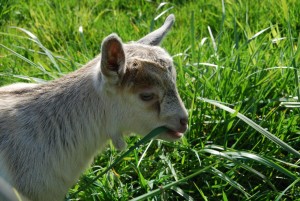 I know the health of my goats is first, before sanitation, as a priority.  Sanitation is key too, but you can’t make good cheese with bad milk.  (You CAN make bad cheese with good milk!)

Mark McAfee runs the largest raw milk dairy in the nation.  Organic Pastures in California has dealt with a lot of crap from the authorities.  He is a hero to me and defends clean raw milk from pasture raised animals with lots of research.  He’s a great speaker.  I include an excerpt of the full letter he wrote to the Colorado Department of Health below:

“To study this issue further, Organic Pastures contracted with BSK labs in Fresno to perform multiple challenge and recovery tests on our raw milk and raw colostrum. When 7 logs (10 million counts) of pathogens were added to one-milliliter samples of organic raw milk they would not grow. In fact they died off. The salmonella was so badly out-competed that it could not be found less than 24 hours later. The listeria drop was less dramatic and was similiar to the E. Coli O157:H7 samples that were studied, but they also did not grow and declined substantially over time.

The lab concluded: “. . . organic raw milk and colostrum do not appear to support the growth of pathogens. . .” ”

Ha!  Read em and weep you regulators.  Not anecdotal at all, but research.

Another friend who tested her own milk (Her Goat milk) told me it was cleaner the day after milking, which proves raw, healthy milk has this “positive pressure” as i like to call it, to take care of itself.

The FDA allows us to have 10 coliforms per ml of milk.  Coliforms are a broad class of bacteria.  There are good and bad ones.  If you have any, than you can dig deeper and find out what kind, like pathogenic for instance.  I just accessed the results of the WSDA’s monthly testing of our milk and it said every test but 1 had <1 coliforms and the other had 1 count.  I could be dirtier if i wanted to!

I’ve tested my own milk at the soon-to-be-up-and-running Food Safety Lab at the LCLT and found the same results-  Clean and normal raw milk.

Raw milk has the stuff present in it to let you digest it.  Amazing!  Duh!  Raw milk advocates have long lists of benefits.  It’s a tense topic with many opposing bits of research.  Some say pasteurizing destroys the calcium and reduces the vitamin C. Good luck weeding through all the info.

We can sell raw, retail milk, and raw approved cheeses that have been aged 60 days.  All else must be Louis pasteurized.  So we had to get this: 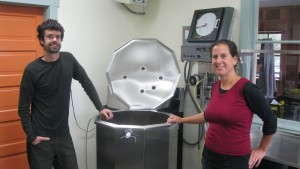 Don’t we look dorky?  I don’t even look that stoked to get that $15,000 addition to our cheese room.  Well, actually i was very pleased that our community helped us get it, but i’m making a point that i would rather make raw cheese because i believe it’s far superior and in some ways safer.  This piece of equipment and the room that surrounds it are part of  the “barriers to entry” in to the dairy business.  It makes it kinda hard for someone who is passionate about cheese making and has a basic knowledge of herd health and sanitation to sell dairy products.  This vat pasteurizer enables us to sell the chèvre that so many people love.  Vat Pasteurization is 145° F for 30 minutes.

Once pasteurization is complete the medium is a void, a vacuum.  Not much lives in it so i better get something growing in it that’s good. I am actually a little more nervous with pasteurized milk. So this is where i come in with a specific culture of lactic acid bacteria that ferment and convert the milk sugar, lactose, in to lactic acid.  This drops the pH down to around 4.6, a pH that botulism cannot thrive in and i bet other bad ones find it intolerable too.  Raw milk has these good flavor producing lactobacilli which can create it’s own unique and indigenous subtleties, your terrior.  Some day i’ll experiment on myself with these natural starters like our friends the bakers use with their sourdough starters or leavens.

You may notice this on your carton of milk, especially on Organic Valley.  It is heated to 280° F for 1-2 seconds!  I cannot find anywhere HOW this is done.  Doesn’t water boil at 212!  This gives their product a 70 day shelf life!  Our milk lasts, usually, sometimes, i’m still getting hard data on it, about 2 weeks before it gets stronger flavor notes not in accordance with the american palate (or my wife’s).  Often if in the right conditions, warm and breathing, raw milk will convert in to another product, whereas processed milk will putrefy.

Once again, not for your health, but for long distance jiggling in trucks.  Your milk is forced through a “screen” at pressures exceeding 2000-3000 psi, therefore breaking up the fat globules so they can’t gather at the top for your cream in-your-coffee/butter making enjoyment.  There are cream-top milks out there again, as well as your local cow.

RAW MILK has killed people, Pasteurized milk has killed people, so have those vicious cantaloupes.   They (theres “they” again, who are those people?) are already pasteurizing eggs, maybe they will have some neat processing method to vaporize melons.

Raw milk intended for pasteurization (i’ve never typed that word so much) can be dirtier, and therefore your can “cook out your bad practices” and sell it “safe.”

I hope i’ve ranted in a way with such sarcasm that you’ll think again about your milk habits. 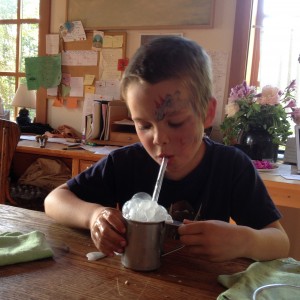 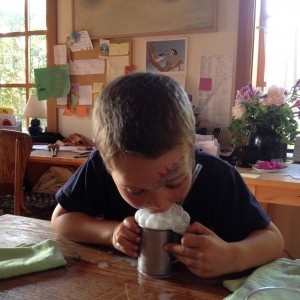 If you want to live on the wild side, let us know and we can get you on our raw milk pick-up list for next season as we’re ramping up our production.  Not enough milk this year.

Look out for our crowd funding video on www.barnraiser.us we’re putting together to get our cheese aging room completed by spring for your diverse cheese eating pleasure!

Good evening.  I need to go out and feed goats hay.  It’s raining.