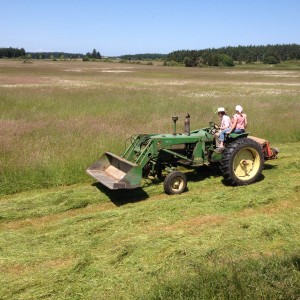 This post is getting out a little late, unlike the hay or anything else this year.  Making good hay seems to take a lot of experience.  Not necessarily know how, but a little “luck” and feeling with when to do it.

I have been taking over a bit of the decisions out in the pasture(as opposed to Ron)since the goat dairy depends on it.  This year i took it more in to my own hands to make the hay cutting call.  The last two years our neighbor Skip Clark does the portion for our goats(most goes to him and his cattle), but i have to wait for when he’s motivated and when to get a square baler from another farmer.  I thought that was too many lives to wait on and i had no control.  So i called everyone who might be able to cut and ted and rake and bale, and found out that Ben Tompson could do the first 2 steps.

There was a weather window we were in, late may, and i was going to get the earliest hay in, which is better than late.  The protein drops off significantly as the summer goes.  Most wait till later when it is less risky.  Make hay when the sun shines and is still shining throughout the process.  Ben said to make good hay early, one has to ted it(stir it up, flip it over) frequently to dry it out.  Early hay means wetter grass and ground and maybe more dew to burn off before tedding again.

I lined up MR Buffum to rake and bale for sunday and that day was not quite enough sun(its SUNday but it was only  a bit sunny). I also lined up some buddies to bring it in to our barn.  The bales were a little heavy.  MR said he used to put salt in between the layers if they were wet and the cows liked it too.

The next day it poured.  Ben said we did the best we could.  About a week ago i opened up 3 bales- 2 were moldy.  150 bales, maybe i’ll get 50.  About $580 total.  $3.80 a bale.  I feel like a smart-ass immature young farmer.  “I’ll show em!”  Skip was out there next week in that very long, dry window and seemed like the whole island brought in hay.  And it was still early.  Oh yea, we are still in that window!   This early june, Skip was able to mow thru a section that is usually too wet to do in July!  He said its going to be a bad year. 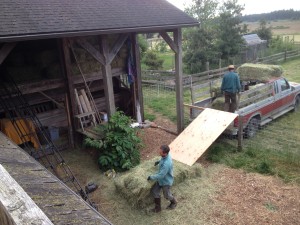 MR said he once had 100 acres cut and it poured.  He said it was almost all they had so they fed it to their cattle mixed with a little better hay.  They didn’t do very well on it.

This island has very depleted soils.  Last year we had a truck apply 20 tons of lime to the pasture which came out to $2700!  The soil had a low pH and that can lock up vital goodies for plants and animals.  We figured if our pasture is healthy than our goats would be and so would the milk i sell to the people.  How can we get that money back?  Hopefully health all around and fewer vet bills.  Skip may of gotten a higher hay yield this year, but yield is not necessarily the best judge.  Quality folks, not quantity!

I picked up 2 tons alfalfa/orchard grass for the second year in a row from Whidbey island.  Ebey’s landing has something like 17 inches of rainfall and very sandy soil.  Alfalfa is good for producing milk and likes well drained growing conditions.  We supplement this with our own grass hay and some even better certified organic dairy grade alfalfa from eastern wa.  If we could not get hay from else where than i would be taking the goats on walks for evergreens thru the winter for some extra protein.  Coming out of the winter, my goats have not looked so good on local hay only.

The milk is still flowing at about 7.5 gallons a day from 9 goats.  During the late winter, early spring, this milk will be made from 100% hay and alfalfa. 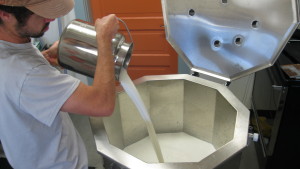 We might want to make hay when the sun shines, we just hope it rains again to let the grass recover from it.  They say it might rain this weekend.  I guess that might screw up our farmer’s market sales, but i would rather some rain. 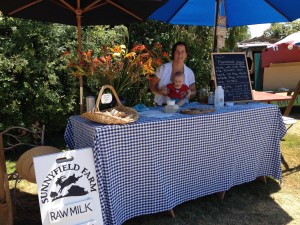