Amazingly enough, I traveled to France, and back.  Just last week I arrived back in Seattle.  It’s not easy to get away from running a dairy, but I had a little window between drying off the milking does and kidding time.  With a great family connection (free air-fare) and my wife being willing to handle the beginning of kidding season I had the chance to see Paris and work at a goat dairy for almost 3 weeks.

I’m a cheese maker and what better place to go than the mecca of fromage.  I had only read and you-tubed the famous cheeses like “Crottin de Chavignol”, “Valencay” and “Banon.”  In Paris for three days before my high-speed train departure for the Alsace region to the east, I frolicked around eating croissants, baguettes, and looking for these famous cheeses. 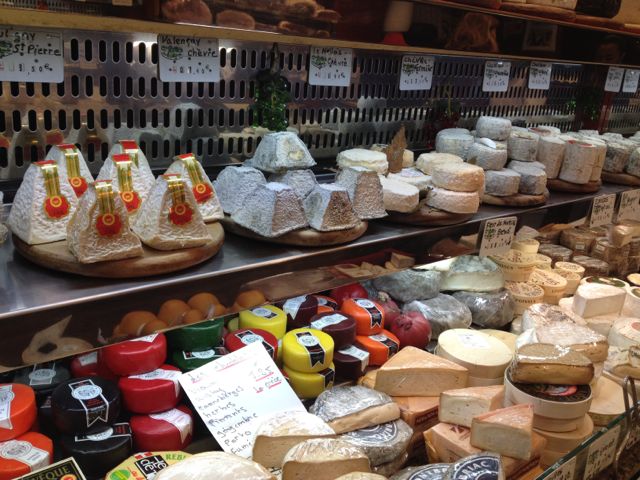 Look at that, some of the cheese is just sitting there, without packaging!

In Paris I mostly walked all around trying to decide if I could have another croissant and where.  The pastries were incredible.  I could only eat so much cheese.  I would go find a fromagerie and get a cheese to go with a baguette and then go sit down somewhere to try it out. Yum.  But I also wanted to go to restaurants, Bistros and try some real french food.  I guess I wish I had more time, and a kitchen to be able to purchase these raw ingredients I saw everywhere to take home and create dishes. 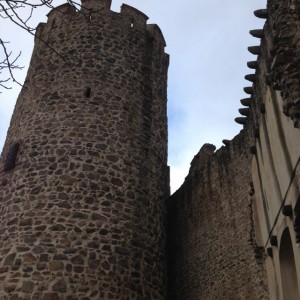 Notre Dame, the Eiffel Tower, Sacre Coeur, the Holocaust Memorial, all the history, the incredible effort, and the two hour lunch breaks!  Really though, I found myself cussing out-loud all the time as I looked at these great cathedrals and stone buildings.  “F*#*!  F*#*!  Look at that!  I can’t believe I’m walking up to a castle, a real castle!  I’m still in France!  There’s the village, there’s the castle above and in a war they all go up there with some food and hide out in protection!”  It was like a fairy tale. 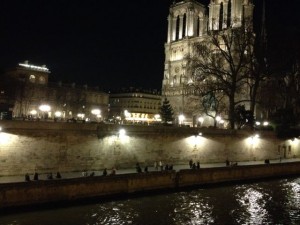 A few weeks before i lined up my WWOOFing (Willing Workers on Organic Farms) membership and started looking for goat dairies I could work at for a short period of time.  I WWOOFed in Australia for a couple years so I new the general culture of experience, but of course not that of France.  Most hosts prefer long stays, but I had a special case and one farm took me in.  I had a little window to travel, learn some cheese practicalities, and then return home in 2-3 weeks for our own dairy to take off again for the season.

The farm is Les Cheverie des Embetsches.  http://www.embets.com/chevres.html  Try saying that!  120 goats and 80 some odd sheep and 80ish pigs and a bunch of horses and the whole farm was on the side of a mountain.  The nearest town was Lapoutroie, very small and very beautiful.  Chestnuts, hazelnuts, oak, maple, pine, fir, bracken fern and scotch broom!  In many ways a lot like home. 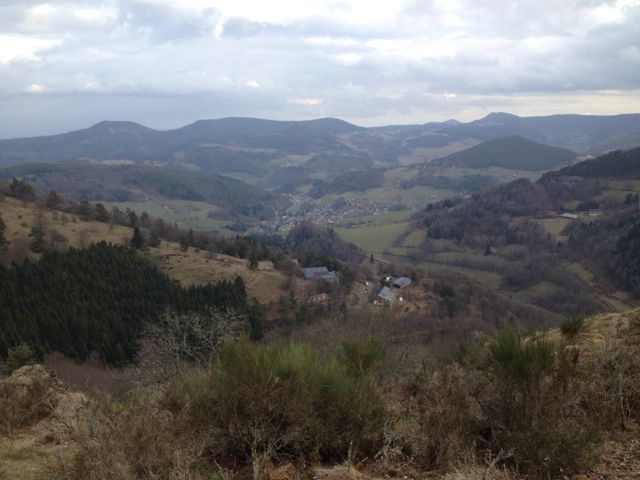 This picture is looking from where they bring the goats to browse (i was there in winter so the goats were on 100% hay as were ours) and is looking at the farm’s buildings.

The man who contacted me was Gaspard, and he said his parents started the fromagerie/cheverie and he is now managing much of the finances.  He is not the cheese maker, though many times during the week i would see him and his sister in the cheese room (fromagerie) helping with packaging and organizing the deliveries.  The cheese maker is Thierry and he has been making cheese on the premises for 32 years.  I didn’t spend that much time with Gaspard, but we did manage to go on the most insane mountain biking trip i’ve ever gone on. 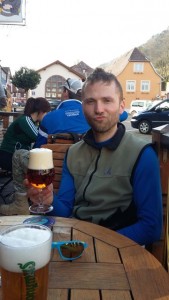 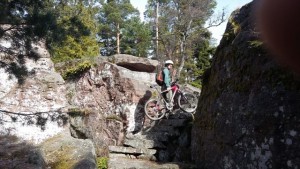 This was just after a four hour bike ride, mostly down-hill from 3000 meters, but lots of ridges and up hill sections.  I was incredibly sore and the beer with a castle in the background was good.  This picture of Gaspard was just after the waiter spilled a whole beer on his lap.  I told him the waiter was distracted by his spandex pants. You can still see the wet spot on the table.

Oh yea right, the cheese, the Fromage!  Everywhere one went on the farm it was up or down.  I went uphill from the WWOOFing quarters to the Fromagerie each day for work.  When the whey drained from the cheese, it went downhill, right to the pigs!   I was very fortunate to be able to work with Thierry most days as they knew that’s why I came.  He was a sweet man.  He knew some English, but when he had trouble communicating he would stop everything, rinse the cheese off his hands and get his dictionary to help our understanding. 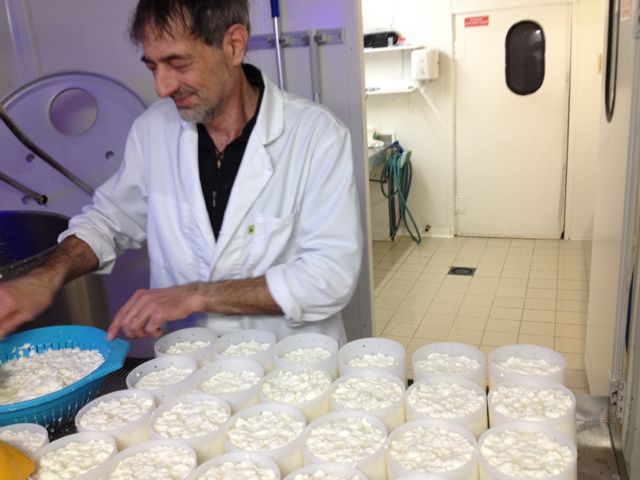 But we gotta back-up a bit. 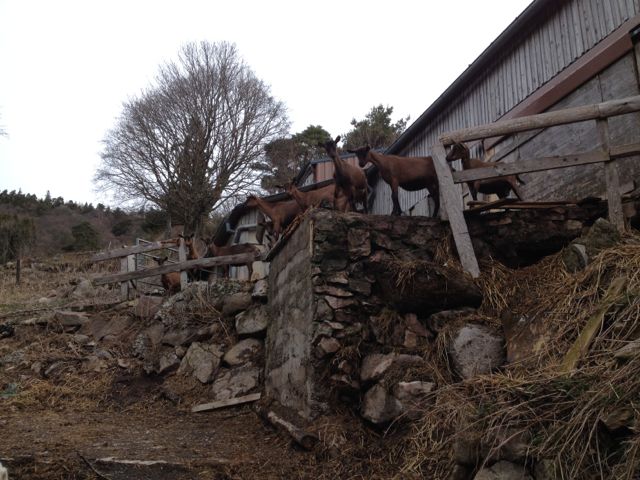 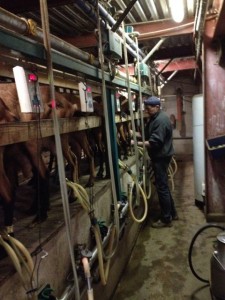 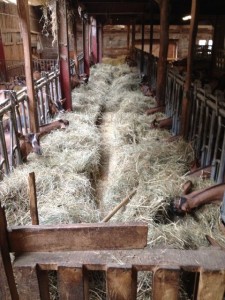 The goats came up a ramp 20 at a time.  We here at Sunnyfield milk 3 at a time, but when I came back from France I upgraded the efficiency to 4!  This is where I started getting surprised and a bit happier.  They did not wash the goat teats at all and the filtered milk went straight in to the vat for raw milk cheese, au lait cru, twice a day! 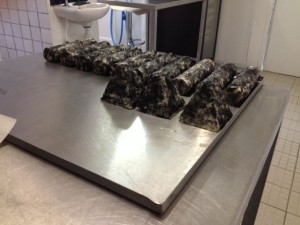 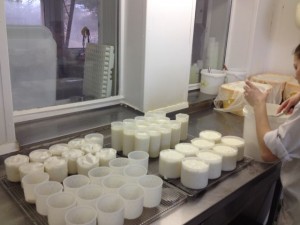 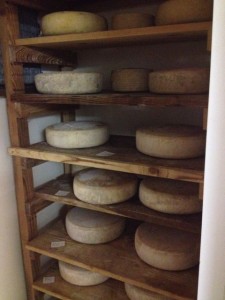 The cheese maker had a simple recipe for how much whey from the previous batch to put in the fresh, raw milk and off the fermentation went again, to be drained about 24 hours later.  32 years and no issues AND their milk is inspected just like ours is.  Plus they barely washed their surfaces and their cheese racks.  “if we use chemicals then we make it empty,” said Gaspard.

Once there was a student from a cheese school working in the Fromagerie.  She decided to clean the aging room, the place where the mold grows, while Thierry was away.  Thierry said afterwards he could not make cheese for weeks.  It was too “clean.”  He had won awards for his cheese and some of the starred restaurants in the area served it. 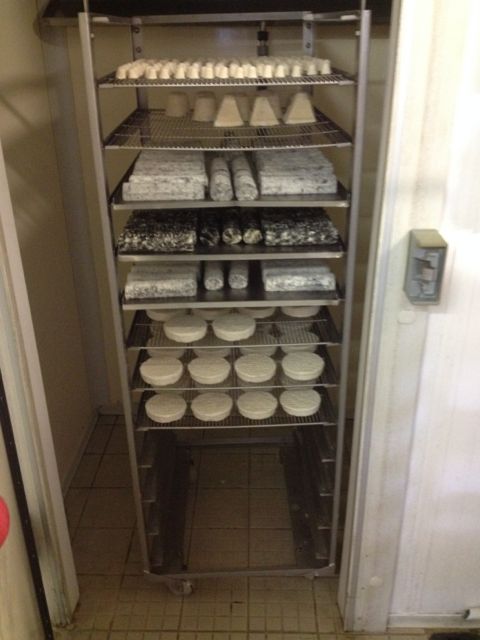 They made quite a few different kinds of fromage.  All with goat milk or lait chèvre.  Oh, except for a tomme which he had a cow dairy deliver some milk to make a 50/50 goat/cow hard cheese.  And that was raw milk too. 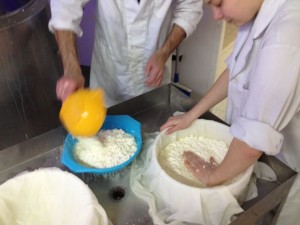 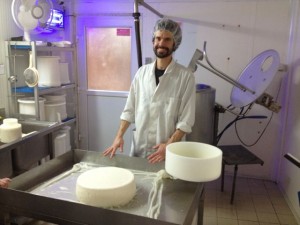 That wheel consists of about 25-30 gallons of milk.  It was lightly pressed, will age 4 months and get 4 baths in brine during it’s ripening period.

I’m not exactly sure what to do with the experience I gained.  Last year we would save up 3 days of milk (considered to be the max to save up milk for quality cheese making) to make a batch to fill my 30 gallon vat.  This fromagerie in France obtained around 40 gallons in one milking and made cheese immediately, which is far superior to what we have been doing.  So i learned how to grow-  As we get more goats on the milking line, we will just make cheese more often instead of saving it up and needing a bigger vat and bigger storage and bigger cooling systems, biggering and biggering.

The main hangup to my hopes and dreams is pasteurization.  If I were to make cheese more frequently, fresher, better quality, then doing it raw would take around 30 minutes to cool it slightly and add some culture.  But we are required in the US to pasteurize cheese that will be eaten in less than 60 days.  SO this process takes me around 5 hours!  Most of that time is waiting for the bulk of the milk to cool back down to 70 degrees so i can start fermentation.  Pasteurization does probably allow me the grace of saving up milk and “cooking” out the built up spoilage organisms, but I wish I had the freedom to make what the French call the “only way to make cheese.”

P.P.S.  The french eat cheese at the END of the meal, with red wine. 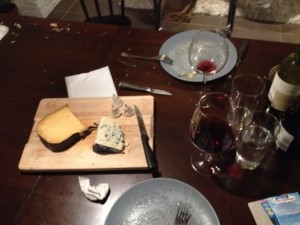 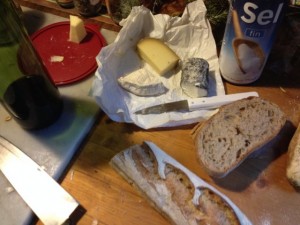